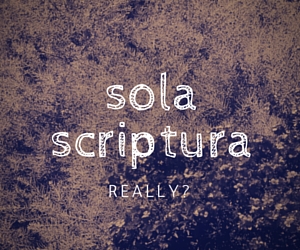 In the past, the doctrine of sola scriptura needed to be defended against mainly Catholic arguments against this foundational doctrine of the Reformation. This is still true, but today there is a growing group of Protestants, I labeled them Subjective Evangelicalism in my last blog, who believe so strongly that God speaks to them outside of Scripture that they have become Catholics in their understanding Scripture, just from a different angle. They have replaced the authority of tradition within the Catholic construct, with feelings or ‘call’ or ‘words from the Lord’ or whatever else God ‘speaks’ to them.(To access the previous two blogs click here and here.)

I would echo the following observations about this problem:

The formal principle of the Reformation, sola scriptura, is absolutely non-negotiable for any truly Reformed (or Protestant) church. And yet, in practice, that doctrine has likewise been put in serious jeopardy… both in liberal and conservative Evangelical circles. This lack of trust in the Word of God to provide sufficient guidance for all matters of faith and practice is the most obvious, perhaps, in the charismatic and pentecostal camps, where new words from the Holy Spirit are as plentiful as rain in Seattle. But in Evangelicalism at large, including cessationist portions of it, feelings and impressions are often met with all the weight of a message from God. How much energy is spent wondering whether God has “called” someone to thus and such a ministry or job or place to live, for example! (For original source click here)

We could then say that the problem of sola scriptura becomes a formula that we can easily lay out. The equations answer a simple question – what is the full revelation of God? The equations look like this:

This is very close to the thinking of the Catholics, just more ‘spiritual’ and ‘evangelical’ sounding. SE would agree with the Reformers that Scripture is the revelation of God. But they would not agree with them that Scripture is the sole, only or full revelation of God. SE would argue that God also speaks authoritatively through his Holy Spirit (for example – after I pray in a word or phrase or image, a ‘call’ on my life, a dream, a happenstance encounter, a bodily experience, etc.). Thus to get the full revelation of God you need both Scripture and the Holy Spirit speaking.

SE usually tries to convince themselves that they believe in sola scriptura by saying – ‘We check our visions, words, or call against Scripture, therefore, we believe in Scripture alone as our ultimate authority.’ Well, yes and no. It’s not in what this affirms that is the problem, it’s what is not explicitly stated that is the issue. On the one hand, it is true for SE that God’s word is the authority against which subjective experiences must be checked. This is good, and it does affirm the authority of scripture. But, on the other hand, this perspective allows for God to authoritatively speak outside of Scripture. God reveals himself, then in both, objective ways and subjective ways. His full revelation is the combination of both of these. Hence the equation as it stands.

For example, if God speaks to me after a prayer in a picture, SE would say that this is authoritative revelation because God is speaking to me through this picture. I must then check this against Scripture. If this picture is not contradicted by Scripture I MUST do it, since it is God speaking to me. To do otherwise would be to bring his discipline upon me for disobeying his revelation. Thus SE maintains two authoritative sources of revelation, just like the Catholics.

Scripture = the full revelation of God

I affirm the Reformation perspective on sola scriptura and it is this doctrine that I seek to, ever so briefly, outline below.

“All Scripture is breathed out by God and profitable for teaching, for reproof, for correction, and for training in righteousness, that the man of God may be complete, equipped for every good work.”

These verses communicate a number of truths, but the one that is most applicable here is simple – Scripture is breathed out by God. The Bible alone is inspired by God. No matter how valuable the history of the interpretation of the Bible is (what the is properly called tradition) it is not inspired. The ONLY thing that we have that is God’s revelation is the word of God written.

But there is more we could say about these verses that add to our understanding of sola scriptura. It is clear that these verses lay out a logical pattern that identify Scripture as the sole authority for the beliefs and practice of Scripture. Jake Magee identifies this, “Scripture is profitable for x, in order that y.  The variable x refers to “teaching, reproof, correction, and training in righteousness.” The variable y refers adequacy and equipping believers. It is the y that Protestants point to as a clear declaration in Scripture of its own sufficiency.” (Source)

The meaning of this verse is clear – there is no other means than Scripture, rightly interpreted, by which a Christian can know God, and to grow in faith and practice. The Bible is God’s ONLY revelation of himself and his will.

The Bereans in Acts 17

“Now these Jews were more noble than those in Thessalonica; they received the word with all eagerness, examining the Scriptures daily to see if these things were so.” (v. 11)

We need to make sure we understand the context so that we get the full meaning of what this verse affirms. Paul and Silas were preaching in the synagogue in Berea, the place of tradition for these Jews. The Bereans were commended by Luke for not simply taking Paul at his word, but for their willingness to cross-reference his words against Scripture, not established tradition. The clear implication is this – if the Bereans found anything that Paul was saying to be contrary to Scripture they would reject it. It is therefore equally clear that for them, THE authority for faith and practice was Scripture alone. Their being mentioned here in relationship to Paul’s preaching affirms the doctrine of sola scriptura.

What about the verses where Paul speaks highly of tradition?

There are a number of times in the New Testament where Paul advocates adherence to tradition.

1 Corinthians 11:2 – “Now I commend you because you remember me in everything and maintain the traditions even as I delivered them to you.”

2 Thessalonians 2:15 – “So then, brothers, stand firm and hold to the traditions that you were taught by us, either by our spoken word or by our letter.”

2 Thessalonians 3:6 – “Now we command you, brothers, in the name of our Lord Jesus Christ, that you keep away from any brother who is walking in idleness and not in accord with the tradition that you received from us.”

2 Timothy 3: 14 – “But as for you, continue in what you have learned and have firmly believed, knowing from whom you learned it”

Their is no doubt that tradition is important to Paul. The issue is whether or not Paul sees tradition as equally valuable as Scripture. The short answer is ‘no’. There is simply nothing in these verses to indicate that Paul viewed tradition as a parallel to Scripture in its authority for the believer and the church. The tradition about which Paul is speaking is connected intimately with the revelation of God in Scripture. He is simply asking for people to hold to that which is biblically identifiable and defensible, and not to some extraneous tradition that is built upon or beside the Bible. The Protestant interpretation of these verses could then be laid out in the following way (Source):

Premise 1:   Scripture is necessary and sufficient as a normative guide for believers.

Premise 2:   If tradition contains elements which are not found explicitly in Scripture, then these extraneous elements are not necessary for believers to hold.

Premise 3:   Paul says that holding to tradition is necessary for believers.

This kind of argument should not deter us from believing in sola scriptura. The reason – multiplicity of interpretation or divergence of opinion on the meaning of a verse or differing theological commitments does not eliminate the ultimate authority of that which is interpreted. These divergences say nothing of that which is being interpreted or the author. It simply means that one of our interpretations, or all of them, are wrong in some way. Or to put it differently, multis interpretatio does not destroy sola scriptura.

Here is where the Reformers got it truly right in their understanding of sola scriptura and so much of evangelicalism gets it wrong. The Reformers believed that the corrective to multiple interpretations is to investigate the history of interpretation. This will help us to understand that which Scripture is saying. We must remember, we never interpret Scripture in a vacuum. Our interpretation must be connected to the many who have done so in the past. By interpreting things in this way we can best understand Scripture and we can best avoid our modern biases in interpretation. Modern Christians and churches are so ignorant of history it is sickening. We have replaced the Holy Spirit’s work in the church over the past 2000 years with a ‘peaceful easy feeling’ of ‘divine presence’ to help us ‘understand’ Scripture. (Yes all the quotations indicate dripping sarcasm!) Oh, how the Reformers would despise us for this approach.

Let me conclude by quoting portions of the Westminster Confession of Faith “Of the Holy Scripture” which articulates clearly and eloquently the Reformation doctrine of sola scriptura. If we understand these words and practice them we will remain biblical in our understanding of Scripture.

VII. The whole counsel of God concerning all things necessary for His own glory, man’s salvation, faith and life, is either expressly set down in Scripture, or by good and necessary consequence may be deduced from Scripture: unto which nothing at any time is to be added, whether by new revelations of the Spirit, or traditions of men. Nevertheless, we acknowledge the inward illumination of the Spirit of God to be necessary for the saving understanding of such things as are revealed in the Word: and that there are some circumstances concerning the worship of God, and government of the Church, common to human actions and societies, which are to be ordered by the light of nature, and Christian prudence, according to the general rules of the Word, which are always to be observed.

IX. The infallible rule of interpretation of Scripture is the Scripture itself: and therefore, when there is a question about the true and full sense of any Scripture (which is not manifold, but one), it must be searched and known by other places that speak more clearly.

X. The supreme judge by which all controversies of religion are to be determined, and all decrees of councils, opinions of ancient writers, doctrines of men, and private spirits, are to be examined, and in whose sentence we are to rest, can be no other but the Holy Spirit speaking in the Scripture.

11 thoughts on “Sola Scriptura: A Biblical Defence, Part 3 of 4”